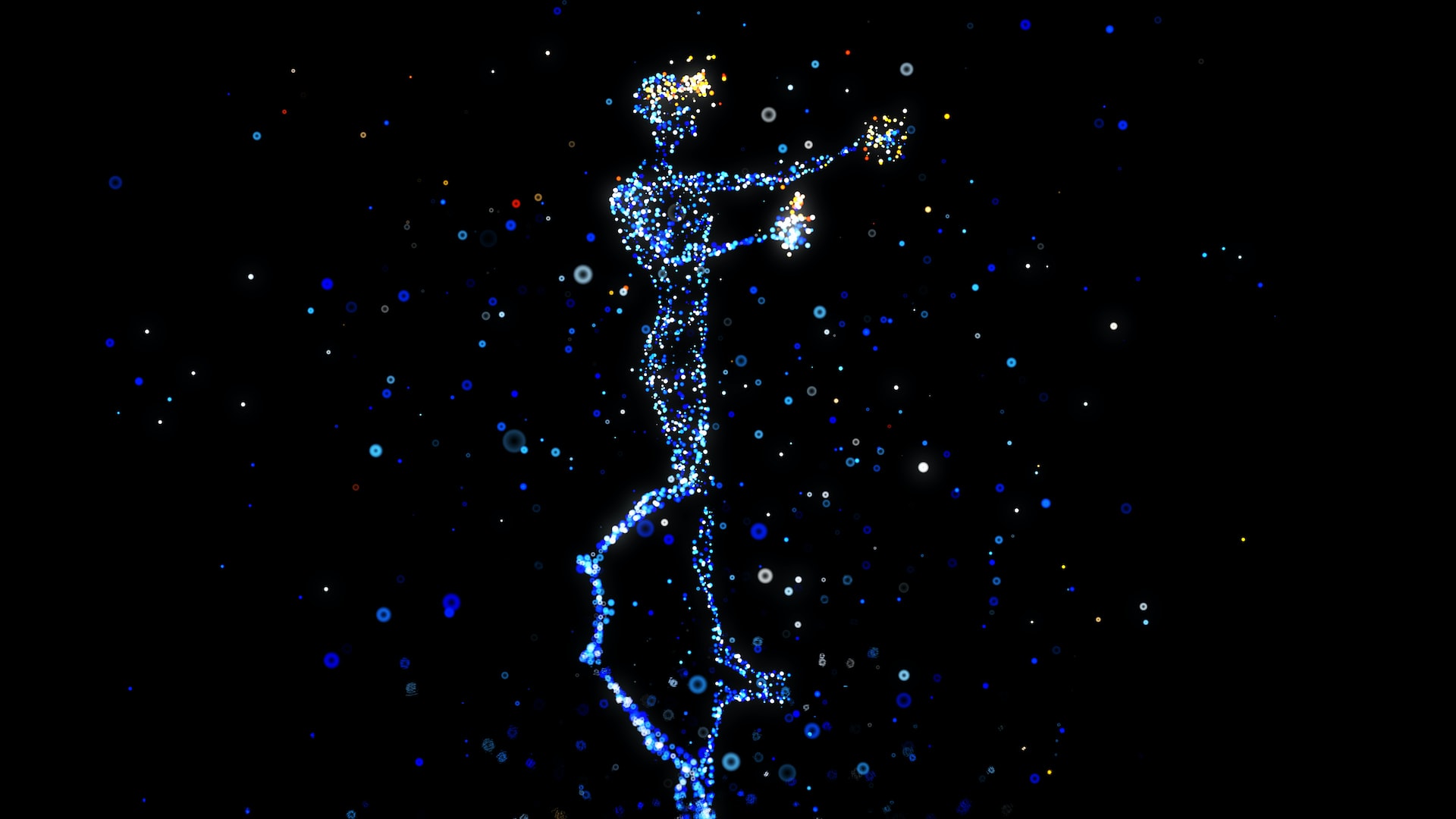 Photo by Julien Tromeur on Unsplash

These observations impact our design for a cost-efficient billion-scale vector search solution.

This blog post delves into these observations and how we think about implementing large-scale vector search without breaking the bank. This work is also published as an open-source Vespa sample application if you want to jump ahead. To demonstrate, we needed a large-scale vector dataset, and thankfully, the LAION team released the LAION-5B dataset earlier this year. The LAION-5B dataset is built from crawled data from the Internet, and the dataset has been used to train popular text-to-image models like StableDiffusion. The LAION-5B dataset consists of the following:

In addition, there are derived datasets, for example, aesthetic scores for images in the LAION-5B dataset. These derived datasets can be joined into the index using partial updates without re-indexing all the data.

There is a growing interest in generative text-to-image models and also controversy around the data they are trained on. Where do these models find inspiration from? What about copyrights? These are questions that many ask. Therefore, building an open, searchable multi-modal index over the LAION-5B dataset is particularly interesting, given the current controversy.

The top-left image is generated by StableDiffusion, the image is encoded using CLIP, and the vector representation is used to search the Vespa LAION-5B index using approximate nearest neighbor search.

This work allows searching both the metadata and the image CLIP embeddings using hybrid search, combining sparse and dense vector representations. We wanted to implement the following core features:

CLIP (Contrastive Language–Image Pre-training). CLIP is trained with captions and image data, inputting pairs at the same time. At inference (after training), we can input an image, or a text prompt, independently, and get back a vector representation.

In addition to the mentioned features, we want to have the ability to update the index. For example, when there is a new derived dataset, such as laion2B-en-aesthetic, which adds new metadata to images, such as the probability of the image containing unsafe content, or the probability of image containing a watermark, we can update the index with that information, without having to rebuild the entire index. The ability to efficiently update an index, without having to re-build the entire index saves resources and cost, but also enable important functionality. For example, updating aesthetic score, where aesthetic score can be used when ranking images for a text query, either as a hard filter, or as a ranking signal.

In a previous blog post, we presented a hybrid approximate nearest search algorithm combining HNSW with an Inverted file so that the majority of the vector data could be stored on disk, which due to storage hierarchy economics, is at least one order of magnitude cheaper than in-memory graph representations. In another post, we covered coarse-level approximate nearest neighbor search methods where the vectors are compressed, for example, using binary representations in combination with bitwise hamming distance to perform an efficient but coarse-level search, and where full precision vectors were paged on-demand from disk for re-scoring.

In this work, implementing search use cases over the LAION-5B dataset, we wanted to combine multiple approximate vector search techniques discussed in previous blog posts. Additionally, we wanted to move parts of vector similarity computations out of the Vespa content clusters to stateless clusters, for faster auto-scaling with query volume changes 1.

Relaxing latency requirements from single-digit milliseconds to double-digits, enables moving vector similarity calculations out of Vespa stateful nodes to stateless container nodes. This then also enable faster auto-scaling of stateless resources with changes in query volume1. In the cloud, where resources can be provisioned on-demand within seconds, paying for idle resources at low user traffic is wasteful and costly.

To scale at ease with query traffic changes, we need to move vector similarity computations to the Vespa stateless container layer and move vector data on-demand, efficiently across the network from content clusters to stateless container clusters. This also meant that we need a way to perform a first-phase similarity search close to the data on the content nodes so that the stateless containers could work on a small subset of the vector dataset. Without an efficient first-phase candidate coarse selection, we would need to move too much vector data per query across the network. This would hurt serving latency and quickly run into network bandwidth bottlenecks at high query throughput. 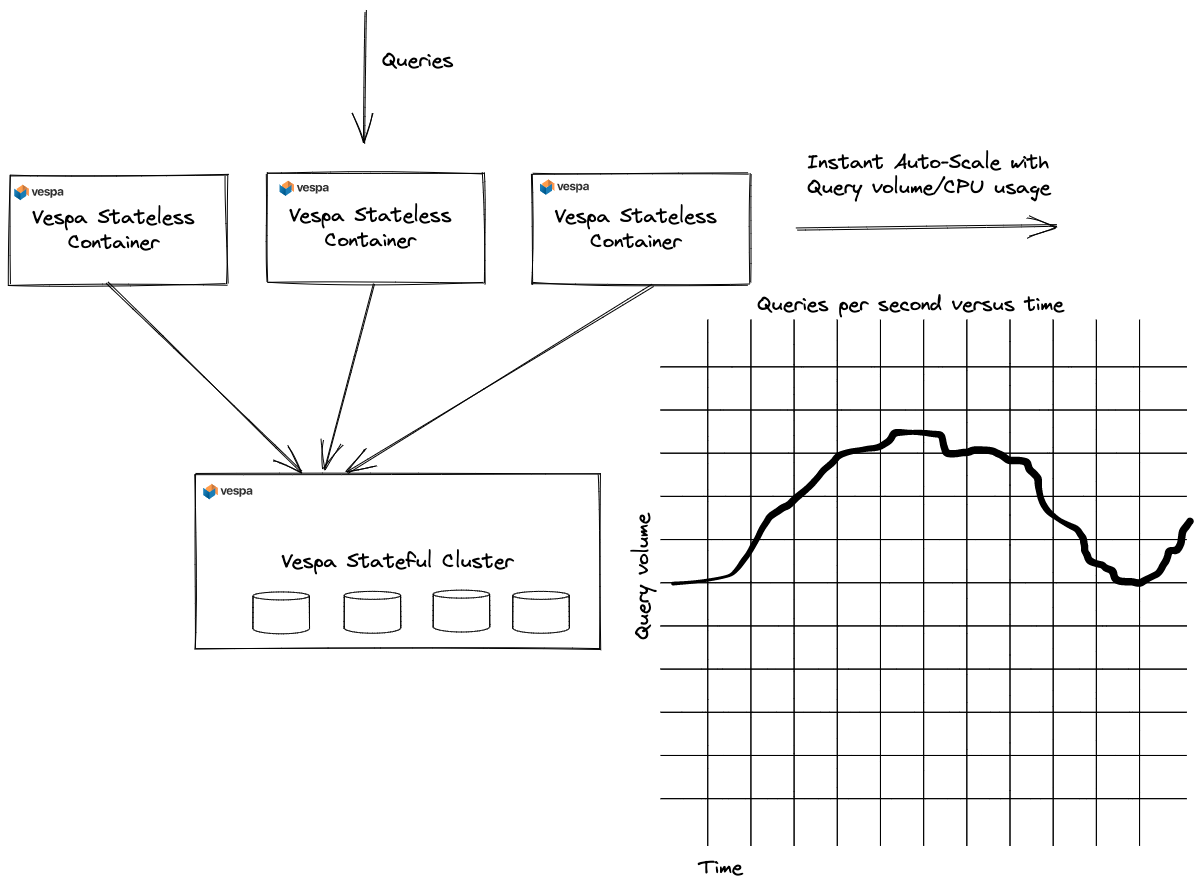 This tiered compute approach, where smaller and computationally efficient models are applied close to the data, is used in many real-world search and recommendation use cases, known as multi-phase retrieval and ranking. Effectively, a distributed search operation falls under the MapReduce paradigm, where the map compute stage is pushed close to the data, avoiding moving data across the network. The reducer stage operates on a much smaller amount of data, which is suitable for transferring across the network.

Vectors from the real-world dataset are assigned a set of close centroids at indexing time and indexed into the inverted file content cluster. The inverted index then maps from a centroid id to the posting list of vectors close to the centroid. Vespa’s inverted indexes are disk-based and memory mapped.

In our previous work using HNSW-IF with a static vector dataset containing vectors without any metadata, we split the dataset into two, centroids and non-centroids, using the same Vespa document schema with a field to differentiate the two classes. This work diverges from that approach and instead represents centroids as a separate Vespa document schema. This has several benefits for real-world datasets:

Our implementation uses a separate Vespa document schema to represent centroids, enabling the use of dimension reduction for the centroid vectors. The intuition behind this idea is that the centroid search is a coarse search. For example, in a 2-dimensional geographical longitude and latitude vector space, we can quickly focus on the grid coordinates to our point of interest before doing the fine-level search.

A technique for performing dimension reduction is principal component analysis (PCA). We train a PCA matrix (128x768) using a small subset (10%) of the vector dataset. This step is performed offline. This dimension reduction technique fits well with the Vespa architecture, and we perform the PCA matrix multiplication during the stateless processing of queries and documents. This step is implemented as a simple stateless component. The matrix multiplication between the incoming vector and the trained PCA matrix is accelerated using Vespa’s support for accelerated inference with ONNX-Runtime.

The PCA matrix weights are stored in an ONNX model imported into the Vespa application package. The ONNX compute graph visualization is given below. The input is a 768-dimensional vector, and the output is a reduced 128-dimensional vector. 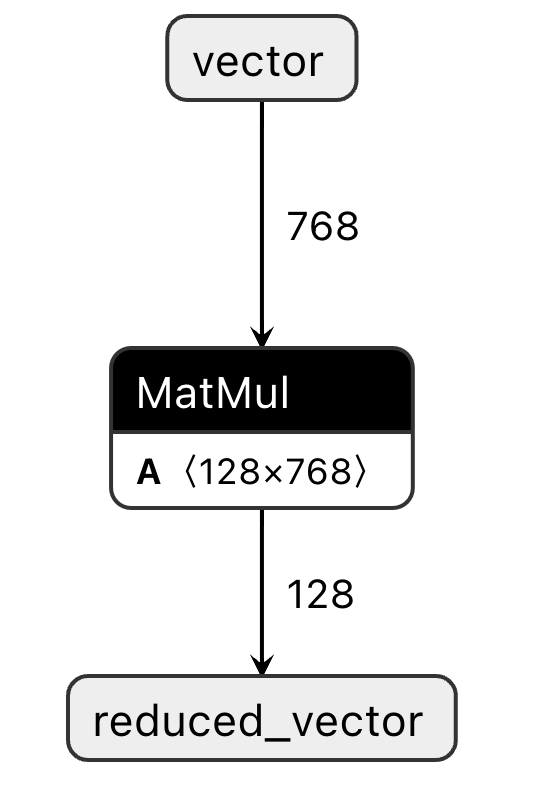 By implementing a coarse-level ranking of the images retrieved by the centroid search, we can limit the number of full-precision vectors needed for innerproduct calculations in the original 768-dimensional vector space. This tiered compute approach is a classic example of tried and tested phased retrieval and ranking. 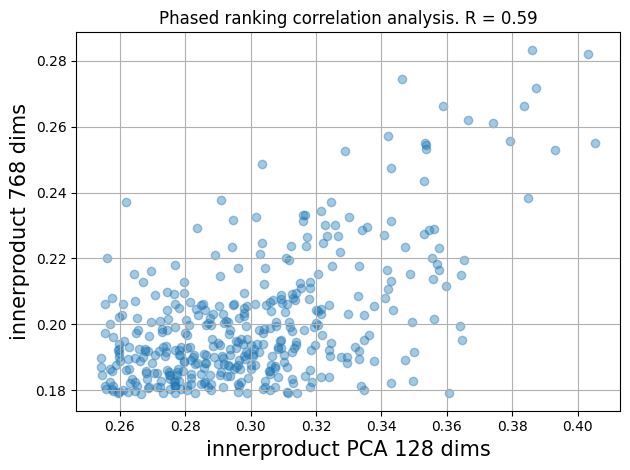 The above simple scatter plot with Pearson correlation coefficient, gives us a visualization and also confirmation that our two ranking phases do correlate. There are multiple different ways to calculate the correlation between ranked lists:

A signed 32-bit hash of the vector representation is used to represent the centroid document id. Since the LAION dataset has many image duplicates, hashing avoids storing the same vector point multiple times in the HNSW graph. We randomly pick about 10% of the vectors from the original dataset to represent centroids.

The distance metric used is innerproduct which we can use since we are working on normalized vectors. The chosen HNSW indexing hyper-parameters provide a reasonable tradeoff between centroid search accuracy, memory usage, and search complexity.

The image schema representing the rows in the LAION dataset is given below. See the full version in the schemas directory of the release sample application.

The LAION metadata fields, like url, caption, and height/width, are self-explanatory. These fields use Vespa’s support for regular text matching with indexing:index, supporting keyword search and ranking, and advanced query operators like phrase, near, onear and more.

An un-scoped prompt text search, searching the default fieldset, will search across both the url and the caption. 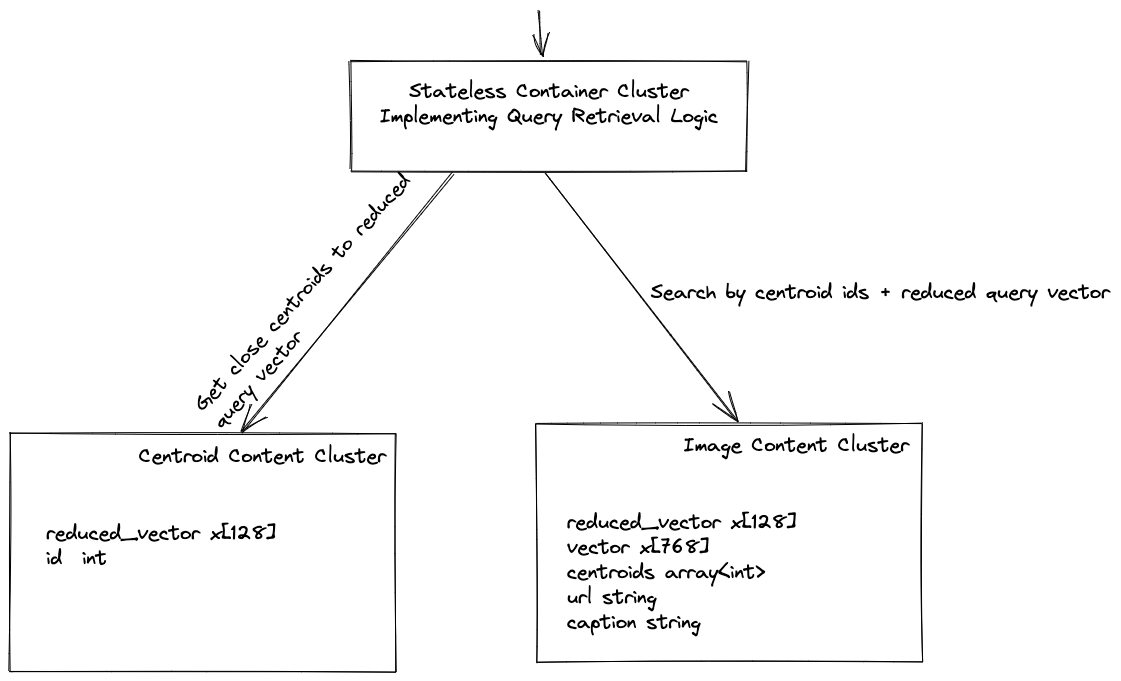 Illustration of schemas and content clusters. Separating the centroid and image schema into separate content clusters, allow for choosing optimal instance types for the workload.

We have, in previous sections, introduced the centroid and image schemas, coarse-level centroid retrieval, and image similarity ranking in the dimension-reduced vector space. The coarse-level search and ranking are performed on each of the content nodes in the image content cluster, but we want to add another ranking stage, run after the top-k closest vectors in the reduced space is found. We need to add a stateless component implementing re-ranking using the full precision vector representation.

A Vespa query is executed in at least two protocol phases:

Below is an example of a stateless searcher implementation that performs global re-ranking over the top 1000 hits.

The searcher illustrates the event-driven flow of a stateless searcher component doing top-k re-ranking. In this case, the middle-tier (or user) has requested query.getHits() hits.
The searcher increases the number of hits to 1K and executes the search, which can include other searchers in a chained execution, eventually reaching the content nodes, which execute the ranking configured in the schema.

After execution.search(query), we have a list of hits ranked by the content nodes. However, to save network bandwidth (potentially hundreds or even thousands of nodes involved in the query), the hits data does not contain the summary data — we need to fetch the field contents before we can start accessing field-level hit data. This is done in the ensureFilled(result, "vector-summary", execution) stage. 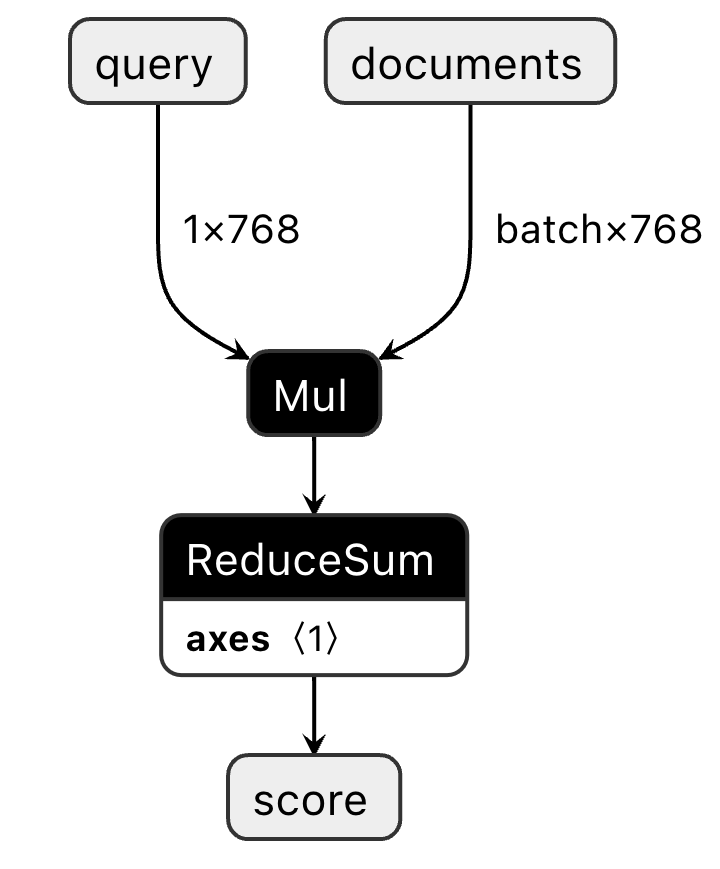 After evaluating the ranking model, all we need to do is to update the hit score and re-sort the hits. See RankingSearcher for the detailed implementation.

By moving the final ranking stage to the stateless container nodes, we move a significant portion of the computing out of the content and storage layer, and we can quickly scale stateless resources with changes in query volume.

In this post, we looked at design choices when implementing a cost-efficient search solution for the LAION-5B dataset.

If you want to start building your copy of the LAION-5B index, you can already try out our billion-scale-image-search sample application.

In the next post in this series, we look at query serving performance, integrating the CLIP encoder into the Vespa stateless container cluster, and how we improve the quality of results by performing query-time diversification using image-to-image similarity. Stay tuned for more cat photos.