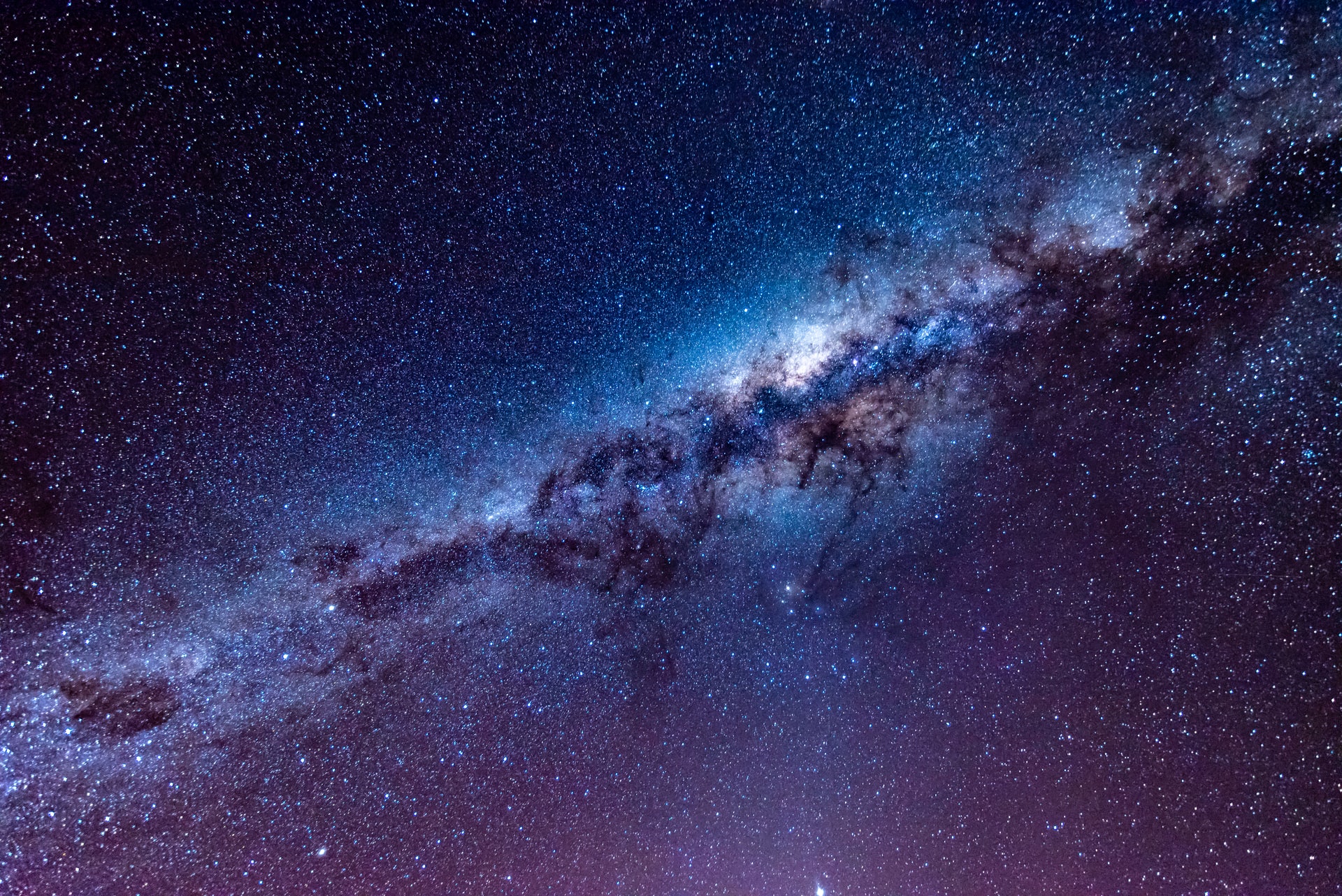 Photo by Graham Holtshausen on Unsplash

This post in this series on billion scale search introduces a cost-efficient hybrid method for approximate nearest neighbor (ANN) search combining (HNSW) with disk-backed inverted file. We name this hybrid method for ANN search for HNSW-IF.

In 2022, many cloud providers offer cloud instance types with large amounts of memory, but these instance types also come with many v-CPUs, which drives production deployment costs. These high-memory and high-compute instance types support massive queries per second and might be the optimal instance type for applications needing to support large query throughput with high recall. However, many real-world applications using vector search do not need enormous query throughput but still need to search large billion-scale vector datasets with relatively low latency with high accuracy. Therefore, large cloud instance types with thousands of GiB of memory and hundreds of v-CPUs are not cost-efficient for those low query volume use cases.

Due to this, there is an increasing interest in hybrid ANN search solutions using solid-state disks (SSD) to store most of the vector data combined with in-memory graph data structures. SPANN: Highly-efficient Billion-scale Approximate Nearest Neighbor Search introduces a simple and effective solution for hybrid ANN search.

SPANN combines the graph-based in-memory method for ANN search with the inverted file using clustering.
SPANN partitions the vector dataset of M vectors into N clusters. The paper explores setting N to a number between 4% to 20% of M. A centroid vector represents each cluster. The paper describes different algorithms for clustering the vector dataset into N clusters and finds that hierarchical balanced clustering (HBC) works best. See Figure 10 in the paper: Different types of centroid selection.

The cluster centroid vector points to a posting list containing the vectors close to the cluster centroid. Disk-based data structures back the posting lists of non-centroids, and centroids are indexed using an in-memory ANN search algorithm. Unlike quantization techniques for ANN search, all vector distance calculations are performed with the full-precision vector representation.

Figure 1 gives a conceptual overview of SPANN for a small vector dataset of ten vectors. There are two centroid vectors, vectors 4 and 9, referencing a posting list consisting of the vectors close to the cluster the centroid represents. A vector might be close to multiple cluster centroids, for example, vector 5 and vector 8 in the figure above. These are examples of boundary vectors that lay in between multiple centroids.

The offline clustering part of SPANN tries to balance the clusters so that the posting lists are equal in size to reduce the time it takes to read the posting list from disk. For example, if the vector has 100 dimensions using int8 precision and int32 for the vector id, each posting list entry uses 104 bytes. With a 4KiB disk read page size, one can read 1024 posting entries in a single IO read operation.

Inspired by the SPANN paper, we at the Vespa team implemented a simplified version of SPANN using Vespa primitives, released as a Vespa sample application. We call this hybrid ANN search method for HNSW-IF.

The following sections outline the differences between the method described in the SPANN paper and the Vespa HNSW-IF sample application implementation using Vespa primitives.

Each node involved in the inverted index query ranks the retrieved non-centroid vectors by calculating the distance between the vector and the query vector. Finally, the result of the two searches is merged and returned.

The query serving flow can be optimized by two heuristics:

The only thing the application owner needs to consider is that deleting large amounts of centroid vectors will negatively impact recall. For most large-scale vector use cases, this is not a real problem. If the use case requires deleting many vector items, one can consider decoupling centroids from real vectors so that centroids are real centroids and not vectors part of the dataset. 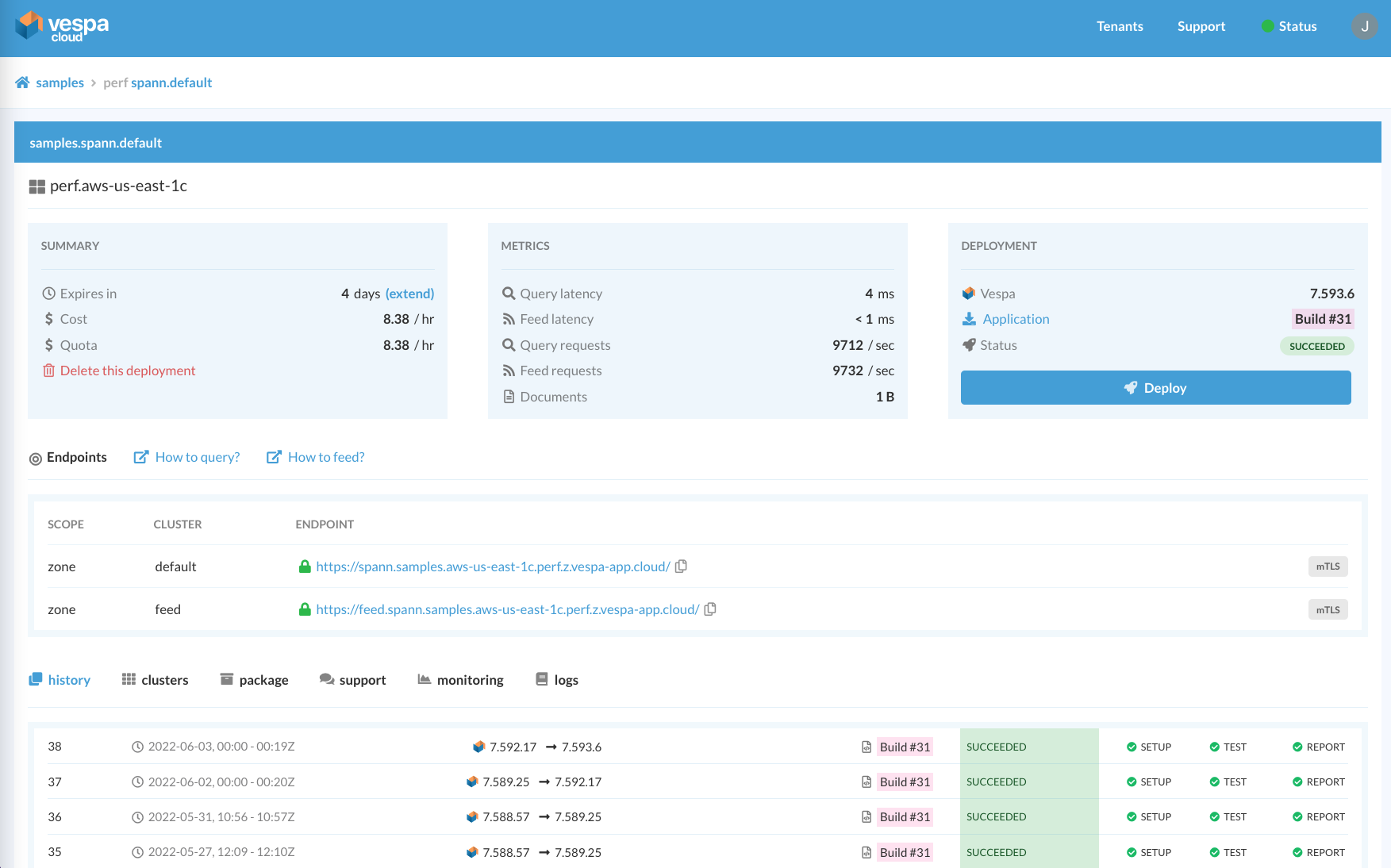 The Vespa HNSW-IF representation uses the same Vespa document schema to represent centroid and non-centroid vectors. They are differentiated using a single field of type bool.

This optimizes the deployment and resource cost - the vectors indexed using HNSW does not need fast local disks since queries will never page data from disk during queries. Similarly, for vectors indexed using inverted file, the instances don’t need an awful amount of memory, but more memory can improve query performance due to page caching.

The Vespa inverted index posting lists do not contain the vector data. Instead, vector data is stored using Vespa paged tensor attributes, a type of disk-backed memory mapped forward-index. The downside of not storing the vector data in the postings file is that paging in a vector from disk for distance calculation requires one additional disk seek. However, in our experience, locally attached SSD disks are rarely limited by random seek but by GiB/s throughput bandwidth.

For our experiments with HNSW-IF, we use the 1B Microsoft SPACEV-1B vector dataset:

Microsoft SPACEV-1B is a new web search-related dataset released by Microsoft Bing for this competition. It consists of document and query vectors encoded by the Microsoft SpaceV Superior model to capture generic intent representation.

The SPACEV-1B vector dataset consists of 1-Billion 100-dimensional vectors using int8 precision and 29,3K queries with 100 ground truth (exact neighbors) per query. The distance-metric used for the dataset is euclidean which is the default Vespa nearest neighbor search distance-metric. The dataset’s ground truth neighbors are used to evaluate the accuracy (recall) of the hybrid HNSW-IF approach.

The random centroid selection is performed outside of Vespa using a python script that reads the input vector data file and randomly selects 20% to represent centroids and sets the in_graph field of type bool to true and populate the vector field with the vector data. The feeder feeds the vector data with in_graph set to true first, to populate the graph content cluster using HNSW indexing, before feeding the non-centroid vectors.

The neighbors field is of type weightedset<string>. The weightedset<string>type allows mapping a string key (the centroid id in this case) to an integer weight. This field is populated by a custom document processor which searches the HNSW graph when feeding non-centroid vectors with in_graph set to false.

For example, for vector 8 from figure 1, the field would be populated with two centroids found from searching the HNSW graph:

This neighbors field is inverted by the Vespa content process (proton), so that a query for where neighbors contains "4" would retrieve vector 8 and expose it to the Vespa ranking framework.

The integer weight represents the closeness of vector 8 to the centroid id. Closeness is the inverted distance, and a lower distance means higher closeness. The original float closeness value returned from the HNSW search is scaled to integer representation by multiplying with a constant and rounded to the closest integer.

The document processor clears the incoming vector field and instead creates the disk_vector field, which uses the attribute: paged option for paging in the vector data on-demand at ranking time.

The schema also has two rank-profile’s which determines how vectors are ranked while performing distance calculations. One profile used for the HNSW search and one for the Inverted File search implementing phased ranking heuristic.

We use multiple stateless and stateful Vespa clusters in the same Vespa application for our experiments. Everything related to clusters and resources is configured using Vespa services.xml. The sample application has two services.xml:

The Vespa Cloud hourly cost for this perf environment deployment, supporting 1B vectors comfortably, is $ 8.38 per hour, or $6,038 per month. 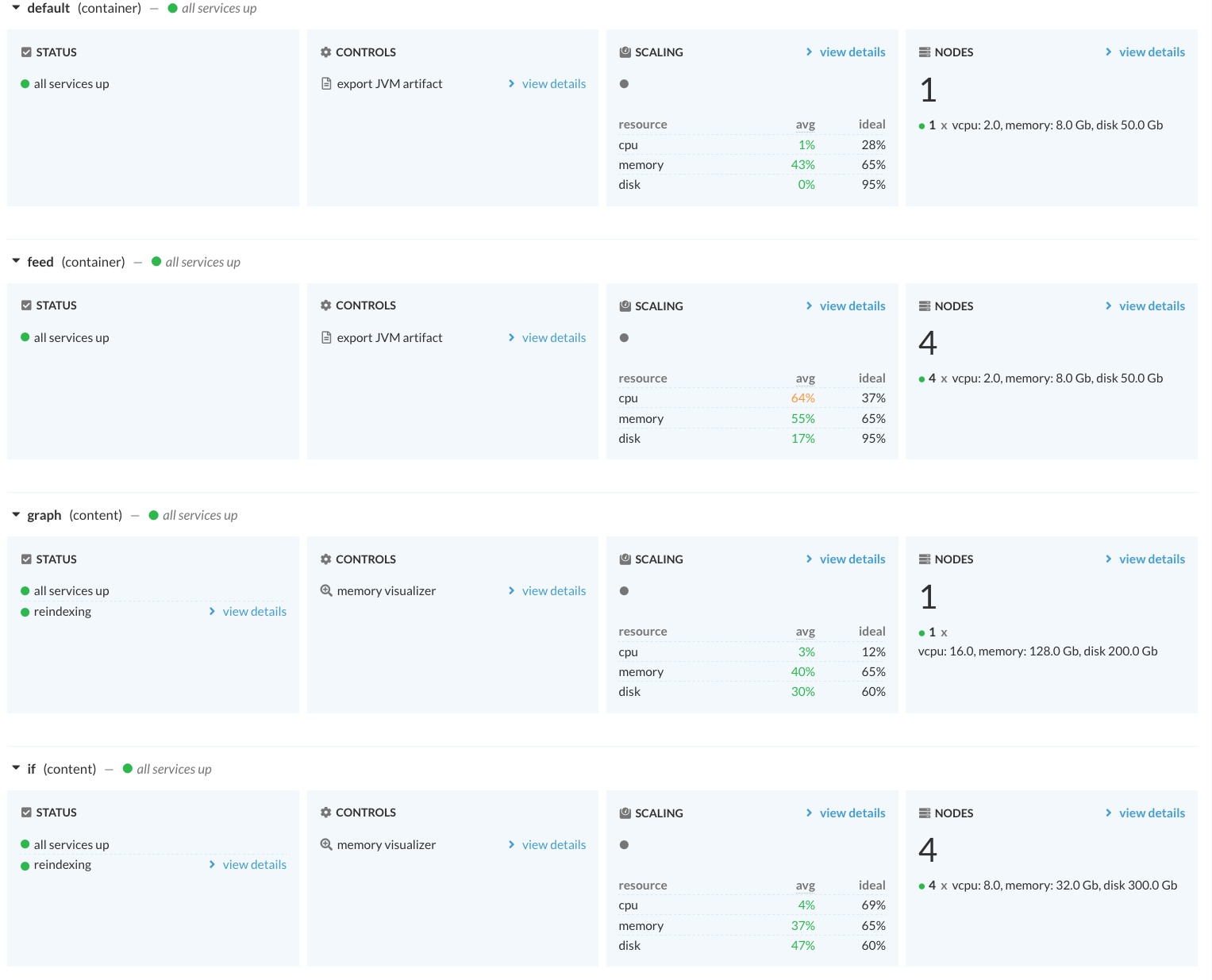 As can be seen from the cluster resource scaling summary, the deployment is slightly over-provisioned and could support larger vector volumes comfortably. Vespa Cloud also allows a wide range of resource combinations (memory, CPU, disk) and the number of nodes per Vespa cluster.

Custom stateless Vespa functions implement the serving and processing logic. The components are deployed inside the Vespa cluster, where communication is secured, and data transferred with optimized binary protocols. The gist of the custom searcher implementing the search logic is given below:

Similarly, a custom document processor implements the search in the HNSW graph, and annotates the incoming vector with the nearest centroids. See AssignNeighborsDocProc.

The following experiments use these fixed indexing side hyperparameters:

With the mentioned allocated resources in Vespa Cloud perf, indexing the SPACEV-1B dataset takes approximately 28 hours. The 200M centroid vectors are fed first and indexed at around 9000 puts/s into the HNSW graph content cluster. The remaining 800M non-centroid vectors are indexed with similar puts/s, and also search the HNSW index at the same rate.

Any approximate vector search use case needs to quantify the accuracy impact of using approximate search instead of exact search. Using the ground truth neighbors for the 29,3K SPACEV-1B query vectors, we can quantify recall@10 with the hybrid HNSW-IF solution: 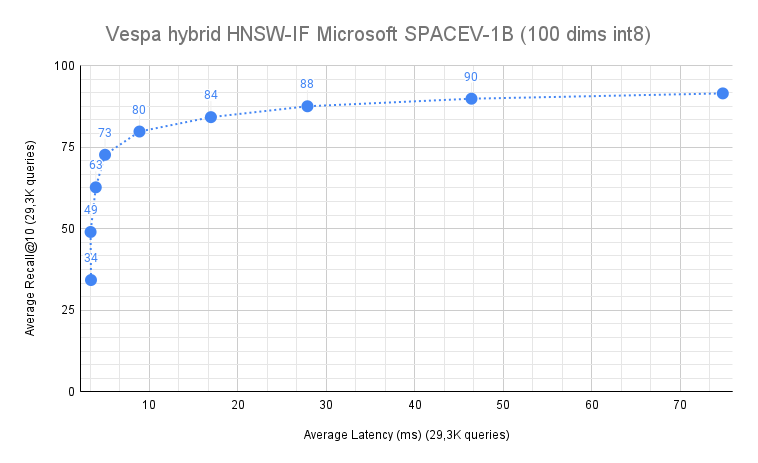 With k=128 centroids, we reach 90% recall@10 at just below 50 ms end-to-end. 50 ms is one order of magnitude larger than what in-memory algorithms support at the same recall level, but for many vector search use cases, 50ms is perfectly acceptable, especially considering the high recall. To put the number in context, 9 out of 10 queries return the same top-10 result as the expensive nearest neighbor search, over 1B vectors!